I remember that first Valentine’s Day very well.  We had been dating just a few months and it was my first Valentine’s Day in LONG time with a real legit honest-to-goodness boyfriend – so I was excited. However, as we were both students, we did not have a lot of money for presents. We agreed to keep it simple. I bought Dallas a book. Dallas showed up for our Valentine’s Dinner with flowers and a present in a gift bag. As I opened it, he was nervous.  “I don’t know if this was a good idea,” he said, as I pulled out a teddy bear.  “Maybe you think we’re too old to be getting stuffed animals…” He was anxious, but I assured him that I LOVED it. And I did.  I explained to him that it was actually the first time a guy had EVER given me a stuffed animal, and it seemed like a special milestone, even if I was 25 when I was reaching it.

The bear was a caramel coloured Gund with a little name tag attached that said “Cashew.”  I put him on my dresser, and a few months later when we got married he lived on the dresser in the bedroom of our first apartment.  Then, a few years later, when we had our son, he lived on the dresser of our son’s bedroom in our first house. As our son got bigger, he played with him sometimes.  This meant that the name tag had to go (choking hazard, don’t you know), but we could easily remember his name by that point.

A couple years later when our daughter came along, Cashew was still a part of our household, and I don’t know exactly how, or when it happened but at least by her first birthday (as photos will prove) Lucy claimed Cashew as her own. And she fell in love. 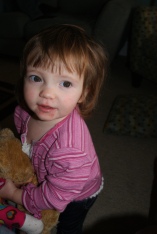 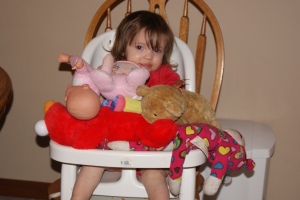 If any of you reading this spend any time with us, you have met Cashew.  Cashew goes everywhere with Lucy.  He attends church most Sundays.  He sleeps with her every night.  When she attended daycare, the staff would bid Cashew good morning each day.  He is absolutely pitiful looking now.  Most people like to comment that he looks “well loved.”  His fur is wearing down in places, and he’s lost stuffing.  He is stained, and he has a hole by his nose.  But Lucy sees none of it. Just the other day it was “bring a toy” day to school.  Lucy was bouncing with excitement that she could finally bring Cashew to school so her “friends could meet him.” When she came home, she couldn’t understand why no one else wanted to play with him.  She was heartbroken that her friends hadn’t loved Cashew as she does.  And how do you explain to a 4 year old: “Well, sweetie, most kids don’t want to play with a worn, sagging, holey stuffed animal” (unless it’s their own worn, sagging, holey stuffed animal…).  She felt like they had rejected her best friend, and, indeed – they had. 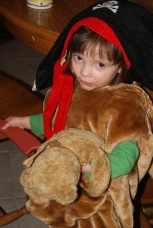 All I knew then was that I was in love with a pretty great guy, who had bought me my first Valentine’s teddy bear and that, as uncertain as he seemed about it, it felt like the perfect present.

A while ago Lucy asked me when Cashew’s birthday was (because, you know, clearly he would have a birthday, what with him being basically real and all).  I told her it was Valentine’s Day, and about Dallas giving him to me.  “He gave you a stuffed bear even though you weren’t a KID?” she said.  She thought it was pretty funny. I told her that I loved it, and that he could not have given me anything better.  She agreed.

So on Saturday, we will all say “Happy Birthday, Cashew!” – because that’s the kind of thing you do when your four year’s old bestie turns 12.   And I will remember:  sometimes, you truly cannot imagine how much something – or someone- can be loved.

Sometimes our culture tells us the lie that the best part of love is at the beginning.  That marriage “kills” love. That you should want your relationship to be like it was in those early days, when you were “so in love,” and that you should seek new relationships when you need to recapture that feeling.

Let Cashew remind you – you can never imagine how much more love there can be to come.

(And Happy Valentine’s Day, Dallas…it really has only gotten better).