A couple of weeks ago, my husband Dallas and I celebrated our 13th wedding anniversary.  Truth be told, we don’t always do anniversaries super well.  We got married at the end of August, and every year by the time our anniversary comes we are in the post vacation we-spent-a-lot-of-money-already-and-we-don’t-want-to-spend-more phase of the summer.  Still, we make an effort.

A couple of days before the big day I googled to see what kind of stuff was up in the city on August 27.  There was not a lot (another thing about the end of the summer!), but there was going to be a Flamenco Dance show at 8 pm at a local venue. That sounded like fun!  We got a sitter, and we planned for dinner and a Flamenco show.  Dinner would be at a nice restaurant we had tried last year on our anniversary and really enjoyed.

Saturday came and we got ready to go out.  This was when we realized neither of us had made a reservation at the restaurant mentioned above – we called and discovered they were booked until 8:30.  8:30???  Who eats at 8:30?  What are we, 25?  We hummed and hawed about a backup restaurant.  We actually didn’t have a lot of time to make this choice since our sitter was coming at six and we had to get to the show for 8.  We picked another restaurant we liked downtown, left at 6 on the dot, found a parking spot and walked to restaurant choice #2.

It was closed for vacation for two weeks.

So, we went to a chain restaurant within walking distance.  Not our favourite thing to do, but our options were pretty limited at that point.  The food was totally okay, and the musak playing in the background was tolerable.

Off to flamenco dancing!!

I should say here that we HAD tried at least two times to go online and buy tickets or to phone and reserve them, both to no avail.  When we checked online that afternoon it said we could buy tickets at the door.  But – you guessed it! – when we got to the door, they were sold out.

By now, we were too late to go to an early movie and going to a late movie was not our cup of tea (a movie that STARTS at 10:00? What are we, 25?).  We had told the sitter our kids could go to bed at 9, and we were pretty committed to stay out at least until then.  I mean, most of the fun of getting a sitter is not having to do bedtime, am I right?

We decided we would go to the park we went to a lot when we were first dating and go for a walk.  Unfortunately, in my ambitious it’s-our-anniversary-and-I’ll-wear-something-special head space I had decided to wear high heels.  I rarely wear high heels (because I can’t wear them for any length of time without collapsing), but I thought I’d be fine since we were supposed to go to ONE restaurant and ONE flamenco show.  Wearing them on a walk meant that I spent the first half of our romantic walk limping and the second half walking barefoot and trying to avoid the goose poop.

The highlight of the walk was at the end of the night as we neared the car.  That was when, for the first time in our lives, we saw a real-life-honest-to-goodness SKUNK – about 10 feet away.  We both froze in place.  It seemed possible that on this night where everything was going wrong that getting sprayed by a skunk was a real possibility.  Then we saw a SECOND SKUNK.  It was on the other side of us, between us and our car.  WE WERE TRAPPED BETWEEN TWO SKUNKS.  We stayed very still for quite some time until we felt they were a safe enough distance away for us to make a break for it.  Then we ran/limped to the car and as I slammed the door I yelled “START THE CAR!!!” like the lady thinking she’s getting away with a deal in the IKEA commercial. (Aside: Did you know skunks attack each other? Because these did.  It was less romantic than it might sound).

It was still only 9:00, and there was a chance our kids weren’t asleep yet, so we decided to go to a cafe that has great dessert.  To our surprise and relief, we were thrilled to see that it was both open and still sold dessert.  We shared a delicious piece of cake and laughed at what a gong show the night had been.   We agreed on one thing: the night of our 13th wedding anniversary was a lot like our marriage, which has gone nothing at all like we planned, but which makes us laugh a lot.  Also, we have had a really good time – not because it’s been perfect, but because we’ve been together.

As I thought back on thirteen years of marriage, the word that kept coming to my mind that night was this one: grateful. Thirteen years after saying “I do,” I am still profoundly grateful that Dallas chose to marry me. I am grateful that I get to be married to Dallas. I can honestly say that even on days when our marriage feels like a complete debacle I think to myself: “I am so thankful that this is the one with whom I get to share my life.”

In my job, I get to talk to lots of married and soon-to-be married couples. Although I don’t profess to have a perfect marriage or all the answers about what makes a marriage a good one, my experience has given me some insights.  And the more I think about it, the more I think that a successful marriage begins in part with this: genuine gratitude that you get to be married to the one who is your partner.

It is sad that this is not always the case.  Our culture has bred a whole ideology that marriage starts with the OTHER person being grateful that YOU picked THEM.  People often talk as if to say: “I had sooo many choices, and aren’t you glad that I picked you?” “You need to appreciate me!” “You need to be thankful for me!”   While mutual gratitude is of course essential, this type of language always makes me nervous.

I smile when, instead, I hear someone about to get married sit across from me and say: “I feel so lucky that I get to marry him!” or “I still can’t believe she wants to marry me!”

There it is! Gratitude.

I said this in one of our premarital classes too, and thirteen years later, I feel the same way. I feel like I hit the jackpot.  I feel like there was a lottery and I won it even though I didn’t buy a ticket.

Let me put on my amateur marriage counselor hat for a moment here and end by saying this: If you’re dating or getting married and you cannot say honestly in your heart that you feel gratitude for your partner, take a pause.  If you are more concerned with your partner knowing what a great deal they got with YOU – take a pause.  Or if you are marrying someone with that “Aren’t you lucky you got me?” attitude, take a pause too.

Still next year, I’m making reservations.  Really, that stuff isn’t cute two years in a row – am I right?

For fun, here are a few shots that remind me of why I am grateful for Dallas. 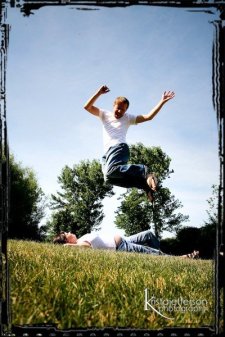 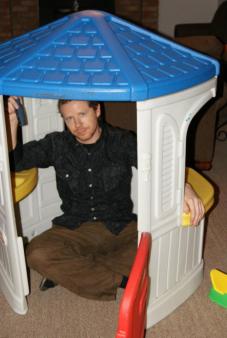 4. What girl can resist that smile? 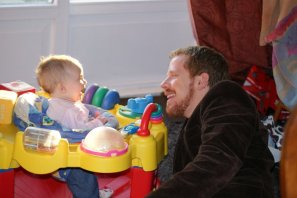 6. And that swanky red beard!  (fortunately I like white beards too)