Well, if you follow me at all you know that I was a leetle uncertain about turning 40.  That big grown-up number freaked me out for all the wrong reasons.  I’m happy to report, as often happens with things that I worry about, everything turned out just fine.  In fact, more than fine, turning 40 was wonderful. There were cakes and cards and friends and flowers and special gifts and four kinds of soup made by my husband for my party.

And also, there was my friend Jane – my surprising gift at 40 that has left me with good lessons and a full heart.

To tell you why seeing Jane* (not her real name) on my 40th birthday was so special, I have to go back a little in my life and get really vulnerable.  I actually have to go back nearly five years, which really makes me feel ashamed as I write it and have to confess how long I let this story go on.

Five years ago my sister died, and I had to learn to negotiate a grief for which I was not ready.  As a pastor, I had been around grief and studied grief a lot and there were some things that I knew about it.  One of those things was that during a season of grieving, you can feel like people let you down.  It is easy to feel hurt and disappointed when people don’t give you what you need.  As I prepared to grieve, one of the things that I prayed for was that I would hold those kind of feelings lightly.  I admit, I’m a person that remembers things. And notices things. I knew it would be easy for me to keep a running list in my head of the people who had NOT sent a card, those who had NOT sent me a message, those who had NOT supported me in the way I wanted.  I said to God: “I have lost my sister and I don’t need to lose more. Help me to be forgiving. Help me to be open hearted.”  I tried really hard, and it mostly went okay but there was one area where I failed: my friend Jane.

Jane and I were VERY good friends, with a long history.  We met during university and there was a season when I literally spent EVERY weekend at her house.  By the time my sister died, we weren’t seeing each other all that often simply because we live a couple of hours apart and life was busy.  Still, we always stayed in touch, and there was a special place in my heart for her. I considered her one of my dearest friends.

Then my sister died.

And I didn’t hear from Jane.

To be honest, I didn’t think too much of it at first.  God was answering my prayer to protect me from keeping tabs, and I knew that life was busy for her.  But one day I shared a post on facebook about a certain author who was coming to speak in Hamilton with whom I had some pretty big issues. That afternoon, I received a long message from Jane asking me to reconsider my stance.

I wrote her back almost immediately sharing further why I was concerned about this speaker, but as I wrote I realized that the reason her message bothered me had nothing to do with the speaker at all.  I was hurt that I hadn’t heard from her at all since my sister died a few weeks before, but that she had found the time to write me over this really inconsequential issue.  To her credit, Jane wrote back immediately with a sincere apology.  She shared that she had been thinking of me and praying for me, but she hadn’t known what to say about my loss. She was ashamed that she had not written sooner. She begged my forgiveness, and I replied saying that she had it.

But something shifted in my heart.

I know, she could not have done any differently than she did.  We all make mistakes and she owned hers and apologized. (I am someone who is VERY indebted to friends being willing to forgive me!).  However, while I  forgave her, my feelings about her changed.  I lost interest in being in touch.  I stopped making any effort to connect to her, I didn’t respond to comments on facebook, and when she suggested getting together I didn’t write back or I found excuses.

This lasted for a couple of years, but as my grief abated, so did my hurt feelings towards Jane.  I realized my grief had made me less able to cope in a healthy way with the situation.  However, I never made any effort to follow up with Jane.  I kind of left things as they had been.

This brings us to a few months ago, and a Sunday morning when I was getting ready to serve communion.  (This is a practice of eating and drinking together as a church to remember what Jesus did for us).  This particular Sunday as I led communion, I asked people, as pastors often do, to consider if they needed to make anything right in their heart before receiving communion. I asked them to consider if they held any grudges against anyone and if there were relationships that needed reconciliation. I invited us all to close our eyes and ask God to show us if we needed to fix any relationships.  I admit it, when I closed my eyes, I thought to myself: “Wow, I’m so glad I’m not in conflict with anyone in my life.”  And in that moment it was like God flashed a billboard in front of me with this word: JANE!!!!!!

And I knew it was true. I knew I had wronged her.  Yes, she had done something that had hurt me. But she had apologized. She had made countless efforts to make it right. And I had dismissed her.  She had deserved better from me. She had deserved for me to have a real conversation with her. She deserved better than me simply freezing her out.  We had been good friends for so long, and I had not treated her well.  And even though I had not held hard feelings towards her for several years, she had no way of knowing that.

I still put it off for a bit. I wasn’t sure what to say: “Um, you may not know this but I said I wasn’t mad and I mostly wasn’t mad but I was kind of mad and I’m really sorry that I didn’t keep you in my heart, even if you didn’t know that I wasn’t.”  I was worried I would make things worse.

Then I was getting ready to turn 40.  And I was making a list for my husband of friends to invite to my party that he might not remember.  As I put Jane’s name on the list, I wondered: “Would she know I really DID want her there??”

I wrote a very long, very weird message.  I explained what I had done. I told her that I didn’t have any excuses, except that grief is weird and sometimes makes no sense. I apologized that she got caught in the cross hairs of my loss.  I asked her to forgive me – all the while saying that I was EXTRA sorry if she didn’t even know what I was talking about.

But of course she did.  She had noticed – how could she not? She wrote back a long message saying how glad she was that I wrote. She apologized to me AGAIN (she really is a good friend) and, with more grace than I had shown her, forgave me.  She even forgave me considering, as I since learned, that SHE was suffering during that time with some struggles of her own, that I’m sure only felt worse when a good friend froze her out.

And on my 40th birthday she drove 2 hours with her husband and 4 kids on a snowy Sunday afternoon to celebrate with me.  It was the highlight of my day.

All of this long story is to say this: if you’re reading this, don’t wait for 40.  Or 50. Or a deathbed.  Or a crisis.  If there’s a name flashing in front of your eyes as you read this, do what you need to do.  Offer the apology.  Ask forgiveness. Make space for the new thing.

It’s such a good gift! 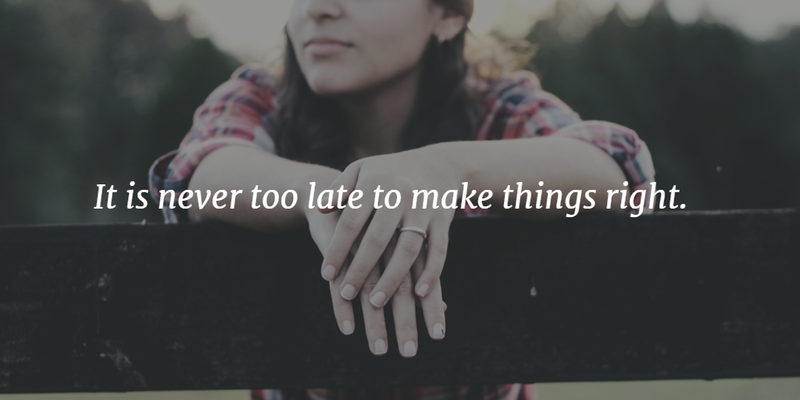