I have learned not to get de-railed on a Sunday morning when someone walks out after they realize I am the pastor of the church.

Once a woman showed up a few minutes before the service and explained she was new to the city, wanted to find a church, etc.  She was very excited because we were “right around the corner” from her.  She told me a bit about her church background, and I had an inkling that she might have an issue with a woman pastor.  I welcomed her warmly and subtly mentioned that I was the Lead Pastor. I saw her face fall, briefly, before she forced herself back into a smile. To her credit, she tried to be discreet. “You know?” she said, “I’m…um…just going to go home. I just remembered something.”  She didn’t come back.

A few months ago it happened again.  A young man showed up, very friendly, “looking for a church.” We had a lovely talk as he found a place to sit.  He stayed most of the service, until I got up to preach. The look of shock on his face was far from discreet this time around.  He looked to his left, and to his right, stood up in the middle of my opening paragraph and quite literally BOLTED to the door.  Like, I mean bolted. His body was sort of bent over in a pointy shape as he took several giant steps out, stopping for nothing.

Sometimes people ask me what I do in those moments. My answer is simple: I preach anyway.  I keep going. I do what I’ve been called to do.

There has been a lot of talk online in my circles in the last couple of weeks about women pastors and the things we face.  This week on Twitter, for example, someone compared women pastors to sex offenders! (That was a new one!) “Wow,” my husband said when I told him, “What did you do?”

I have been in my role as a Lead Pastor of a church for 14 years now, and in those 14 years I have lost count of the number of “how-can-you-do-what-you-do-don’t-you-take-the-Bible-seriously?’ comments I have received.  Yes, it is annoying. Yes, it makes wrong assumptions about me. Yes, I want to defend myself.

And then every few weeks there seems to be another social media flurry when some leader (or, just as often, some random dude with 32 followers on Twitter) says that women shouldn’t teach in a seminary or that women pastors are an abomination or that our disregard for Scripture is akin to men who dish out abuse.  What do I do in those moments?

I visit someone sick.  I go to the board meeting. I lead the Bible Study. I preach the sermon.

I keep doing what God has called me to do.

At one time in my life, I couldn’t tell you exactly when, it became so obvious to me that the only life I could lead that would be God’s plan for me was one where I was a pastor. Sometimes I laugh when people talk about women pastors as if we have taken some lucrative, enviable job with sinister motives to increase our own power.

My people, I would have been delighted if God called me to just about anything else (though I’m sure glad God didn’t).  It isn’t actually fun for us women pastors to have to defend ourselves all the time, online or in person. We don’t enjoy wondering if we are going to get into debate when we arrive at a pastors event, if we will be ignored, looked down on, chastised.  It would be nice not having certain people assume that we just don’t take the Bible as seriously as they do.

But at some point, to even be a woman in ministry, you decide that you have to listen to God’s voice above all the others. And you follow, and you pastor.  And you keep following THAT voice, day after day – even when an inane Twitter debate could easily deter you.

It’s not that I don’t want to hear the feedback of others, or that I don’t consider those with a different understanding of the Bible than me on these matters to not be my brothers and sisters in Christ.  It’s that, and I say this with all the love in the world:

I have stuff to do.  I have a call to live.  I have a church to pastor.  (And children to raise and meals to cook and sleep to get and friends to love).  I know, already, that not everyone agrees with me and what I do. And it’s okay – I know who has called me.

So if you are a woman pastor who feels over it just like me, I feel you.  It sucks. Now, let’s turn off our phones, open our Bibles, and keep working.  God’s got stuff for us to do. 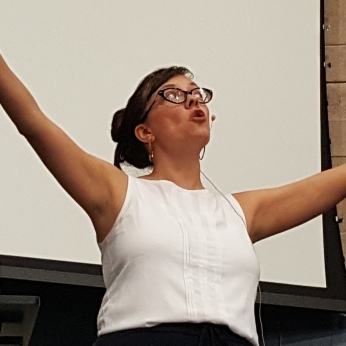 A few pics of me doing what I do – one also does not preach in order to get a flattering picture of one’s self. Clearly.