It’s one of my favourite times of year – Easter planning time!  A number of years ago, we decided that we wanted Easter to be the most memorable day of the year at MHBC, one that is remembered as a true day of celebration.  (Also, I am sort a “go big or go home” sort of personality, and let’s just say that when it comes to Easter: I never go home).

But every year as I start to brainstorm, the same thing happens as I browse the internet for some new ideas.  It seems, to me, that the ideas are either: 1. Not that interesting, or original (Example: “Do an egg hunt!”) or,  2. Completely unattainable for the average small church. The ideas are geared to mega churches with big budgets and we simply couldn’t do them.

This year I got to wondering if there were other small-ish churches like ours who might want some ideas for making Easter a big celebration just like us, and I thought I would share some of the things that we have done and invite you to steal any of these ideas that you like.  (Full disclaimer here: I know some of you have churches where these may not work – we are a pretty laid back place – but there are lots of simple things here that I think even the most formal church can incorporate).

As churches, we often decorate for Christmas, so why not Easter?  There can be a lot of impact when people walk into a place that has clearly been made special for a special day. Usually our decorating fits with themes that we have been following since lent.

Start your service with joy and excitement!  Here are some simple things that we have done:

I have written more skits and puppet plays for Easter than I can count, and the goal of all of them is to get people feeling the joy of Easter Sunday.  Three examples:

(If you want the scripts for any of these, contact me!)

And by the way, for Easter – keep the kids in!  Having the whole family together makes the service special and exciting! It also means no teachers need to miss celebrating Easter, either.

I said that sometimes those big musical numbers you see online seem like too much.  But you can make music special at Easter in other ways. A few of our faves were:

Last year I asked people to save me their LOSING roll up the rim coffee cups from Tim Horton’s (so this is one just for Canadians!).  Ahead of time I turned them into a large cross. I talked about the ways we experience disappointment in life – like rolling up a Tim Horton’s cup and losing – again.  I shared how the disciples must have been so disappointed when the thought that Jesus had basically said: “Play again.” Then I talked about what the cross means and how Jesus takes all those disappointments there. The disciples though they had lost with Jesus – but turns out when the stone was rolled away – they had won!

Another year I talked about the way we leave flowers at graves when people die.  I brought in 200 carnations, and laid them across the front of the church. At the end of the sermon, I invited people to come and PICK UP a flower, as a reminder that DEATH HAS NOT WON.  Simple, but powerful.

Another year, we made a large sign that said “King of the Jews” (like the sign that was placed on the cross).  People then came up and added their name to the sign, symbolizing he was king of THEM. 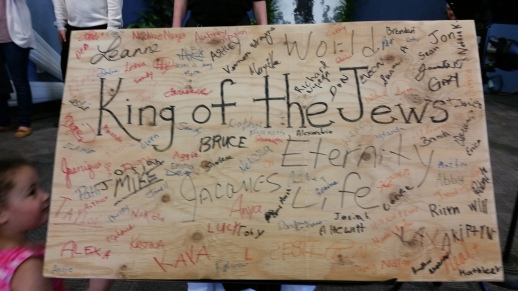 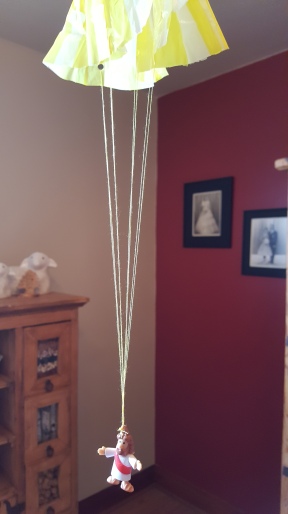 (Let me say, that if you usually don’t do things like this, a simple throwing of balloons at the end of the service can be a huge and special memory!)

Celebrate together as a church family after the service.  Things we have done in this time include:

Listen, I know some of you are going to say.  This doesn’t sound very REVERENT. This sounds very SILLY.  But I like the saying “the medium is the message.” Jesus is alive!  He rose from the DEAD! The world has CHANGED!! Why shouldn’t we celebrate and have fun on Easter?  To me, the celebration embodies the joy of the greatest message of all time. And these celebrations can happen in churches of any size.

Here are some ideas of things we have done for Holy Week services. 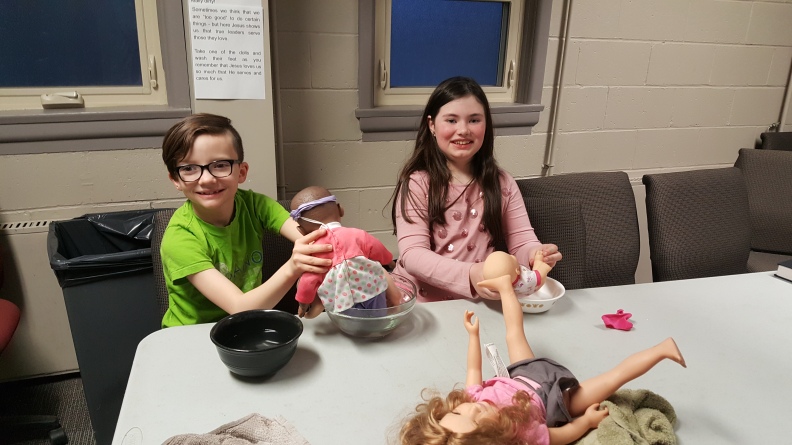